In response to the recently published Draft Planning Development Framework for St Peter Port Regeneration Areas, Charlie Hodder from PF+A shares a vision for how St Peter Port could develop in the future with public space designed for people and social experience.

One thing we can say with certainty is that St Peter Port is a unique town inextricably linked to the harbour; it is our greatest asset. In Charles Brett’s 1975 description of St Peter Port, he pays tribute to our forefathers when describing the extraordinary fine construction of the harbour “built from massive blocks of stone”. Unfortunately, he then goes on to describe the appearance of the harbour as “rather a mess”, citing a number of reasons: seaport jumble that has got out of control; States’ departments housed in huts on the quayside; and the seemingly unsolvable problem of cars “jammed solid” on every pier and jetty. Many of these eyesores have been greatly improved, but the prevalence of the car remains a nut yet to be cracked.

Hope might be at hand with the proposals for the new harbour, which offer the possibility of additional parking at North Beach to reduce parking elsewhere. This news comes hot on the heels of the publication of a new planning framework, which seeks to shape the future development of the town. At the beginning of May our planning authority published the Draft Development Framework* for three strategically important Regeneration Areas previously identified in the 2016 Development Plan. Despite being produced by UK-based consultants who have little familiarity with the town, this extensive document provides some useful analyses and identifies three areas with significant potential for improvement. The three Regeneration Areas are the Lower Pollet, the South Esplanade (including the Mignot Plateau), and Mansell Street (including Trinity Square).

Reading the draft report, it does seem as though the harbourside has suffered from an incremental addition of traffic engineering since the 1960s, to the detriment of the other values that make a place enjoyable. Perhaps now is the time for a more holistic strategy that prioritises places and people.

The report does not propose wholesale change and instead places more focus on opportunities to create new areas of improved open public space. Each of the three Regeneration Areas has been analysed in technical terms - but more than this, the document offers a vision for what could be. The authors have tried to define what makes these areas important to us all as ‘places’ and how these places could be improved to be more useful and vibrant. This is a relatively modern approach; 21st century town planners and architects have adopted a more integrated, people-focused way of thinking about towns and public spaces. We now know that successful urban design strengthens the connection between people and places by enhancing public squares and streets to emphasise their inherent, and often shared, cultural and heritage characteristics. Perhaps it might simply mean responding to a need in the community for a more sociable environment where people want to spend time, rather than simply pass through.

At the Lower Pollet it is recognised that the existing taxi rank, a sea of galvanised railings and the infamous smoking shelter, does not create the best first impression to those approaching the high street from the north.

The North Plantation has regressed into a conglomeration of telephone boxes and redundant street furniture, but it has ample opportunity to become a more integrated public space surrounded by restaurants and activity.

The area around the Town Church is a unique setting for a church so close to the quayside (and a pub). The three gothic gables facing Herm are the first thing seen by visiting yachts, but this space is painfully neglected as a key piece of the connectivity of the town.

The South Esplanade is identified as an area that should cater for the needs of people instead of cars; an area that would benefit from improved pedestrian access to make it a more attractive place to pass through and spend time. It is perhaps the biggest opportunity to create an improved public realm. This Regeneration Area also includes a vision to transform the Mignot Plateau into a more people-focused destination which provides more space to appreciate our charming harbour and its activities.

The vision for Trinity Square is to design an attractive, accessible and integrated public open space where people can sit down and spend some time. This would be supported by breathing new life into the old quarter centred around Mansell Street, offering the opportunity for more appealing town centre living above shops and restaurants and an increase in the area’s overall vibrancy.

A hundred years ago, St Peter Port was a vibrant, bustling harbour town; the central location for retail and also the main hub for trade with the rest of the world. As a result of today’s finance-dominated economy and the prevalence of internet shopping, the town experience has changed profoundly. In the past, people have highlighted the value of the town for tourism and the finance industry. If we can retain and enhance the vitality of the town, that would maintain Guernsey as a desirable place for everyone.

Accepting that the high street will have fewer viable shops in the future begs the question of what can we do to support the town, retain its appeal and increase its usefulness. In the UK we have seen some brilliant schemes from architects that bring a mix of different uses back to towns, for example integrating more space for seating, urban trees, dynamic lighting, thoughtful signage and street furniture, opportunities for play for children and accessible design for all ages and abilities. St Peter Port, like other towns, will flourish if it prioritises public spaces designed for people and social experience.

The Draft Development Framework for the three St Peter Port Regeneration Areas presents an opportunity for everyone in the community to get involved, not least local architects and designers. Consultation is open until 15th June 2021, and interested islanders can help to reimagine the town and provide the creative spark that will attract more activity and essence to St Peter Port, making it central to people's lives again.

*If you are interested in how the town could develop, see the draft Development Framework for the three regeneration areas at https://www.gov.gg/developmentframeworks. 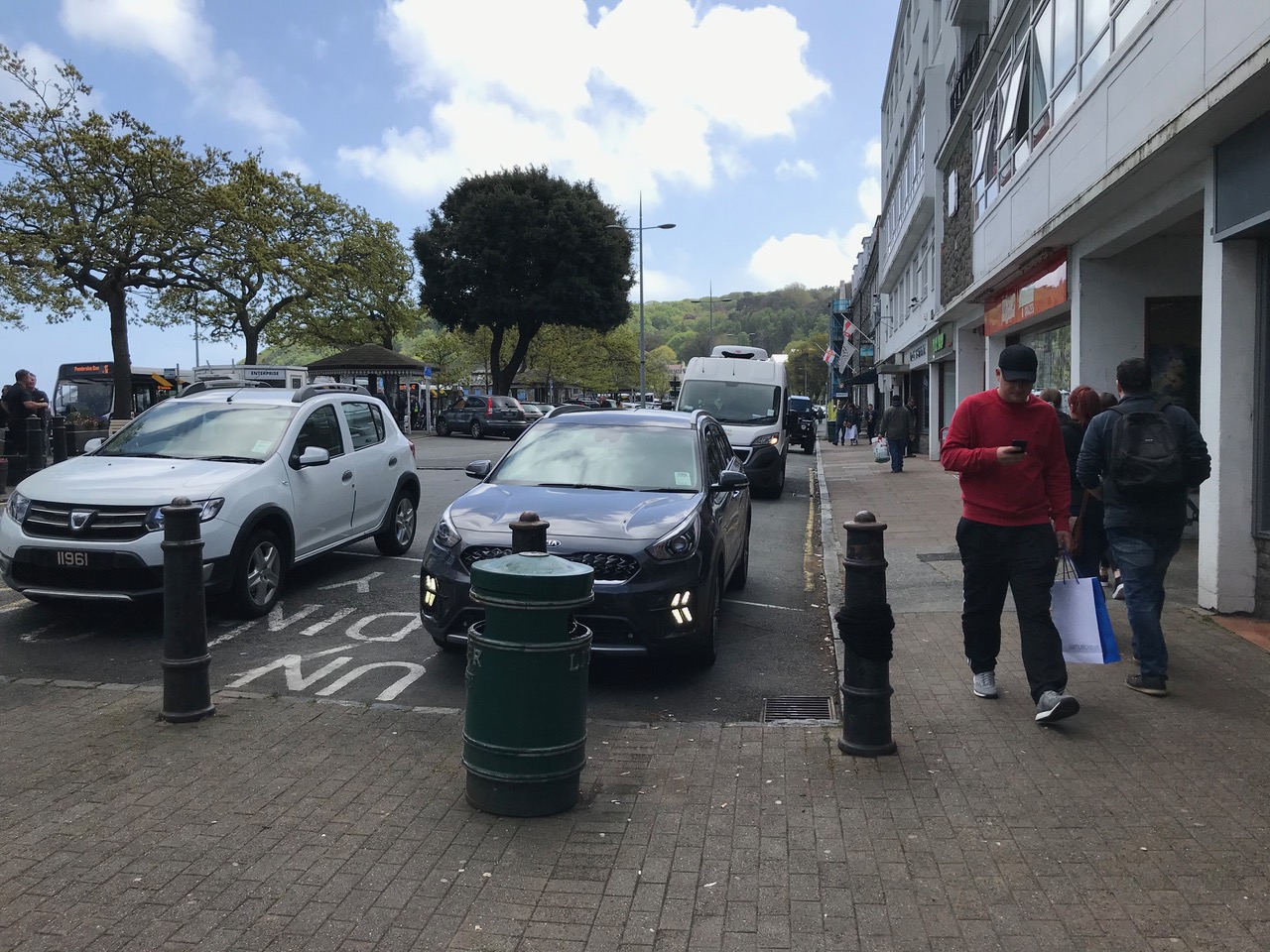 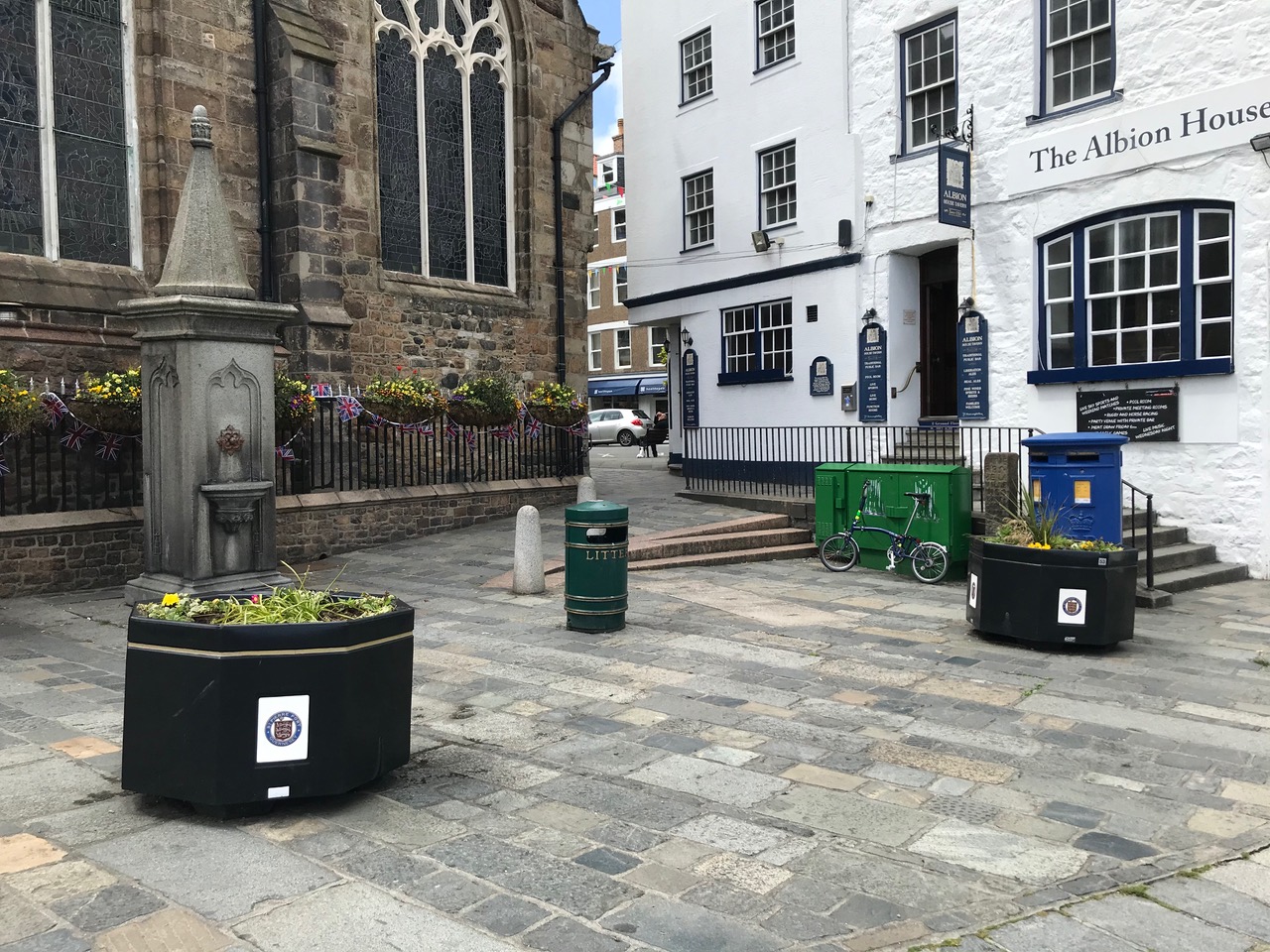 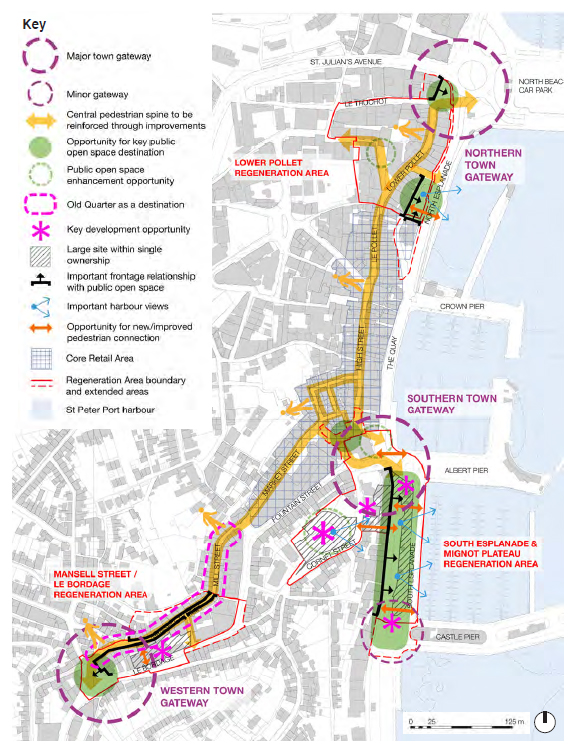 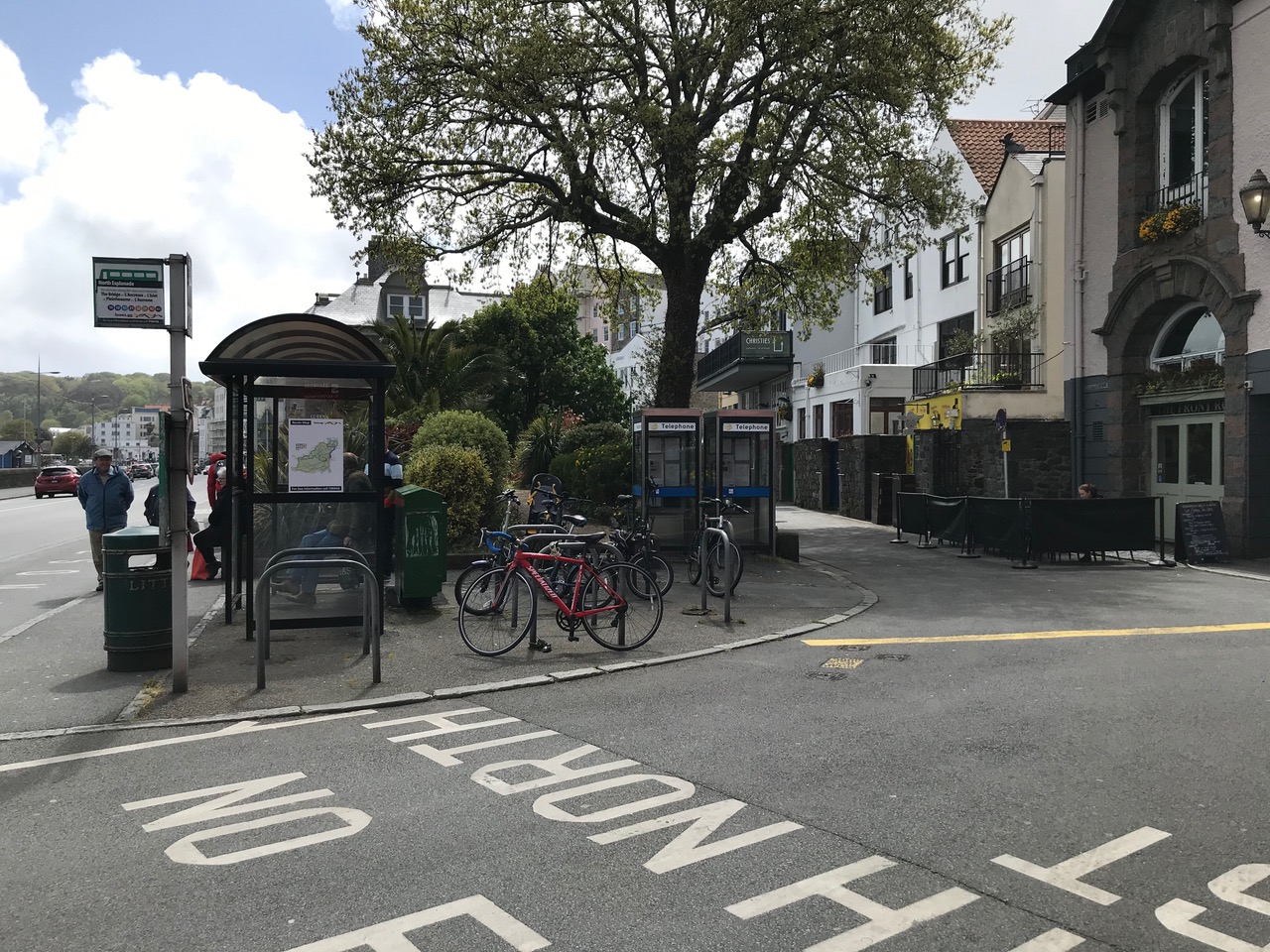 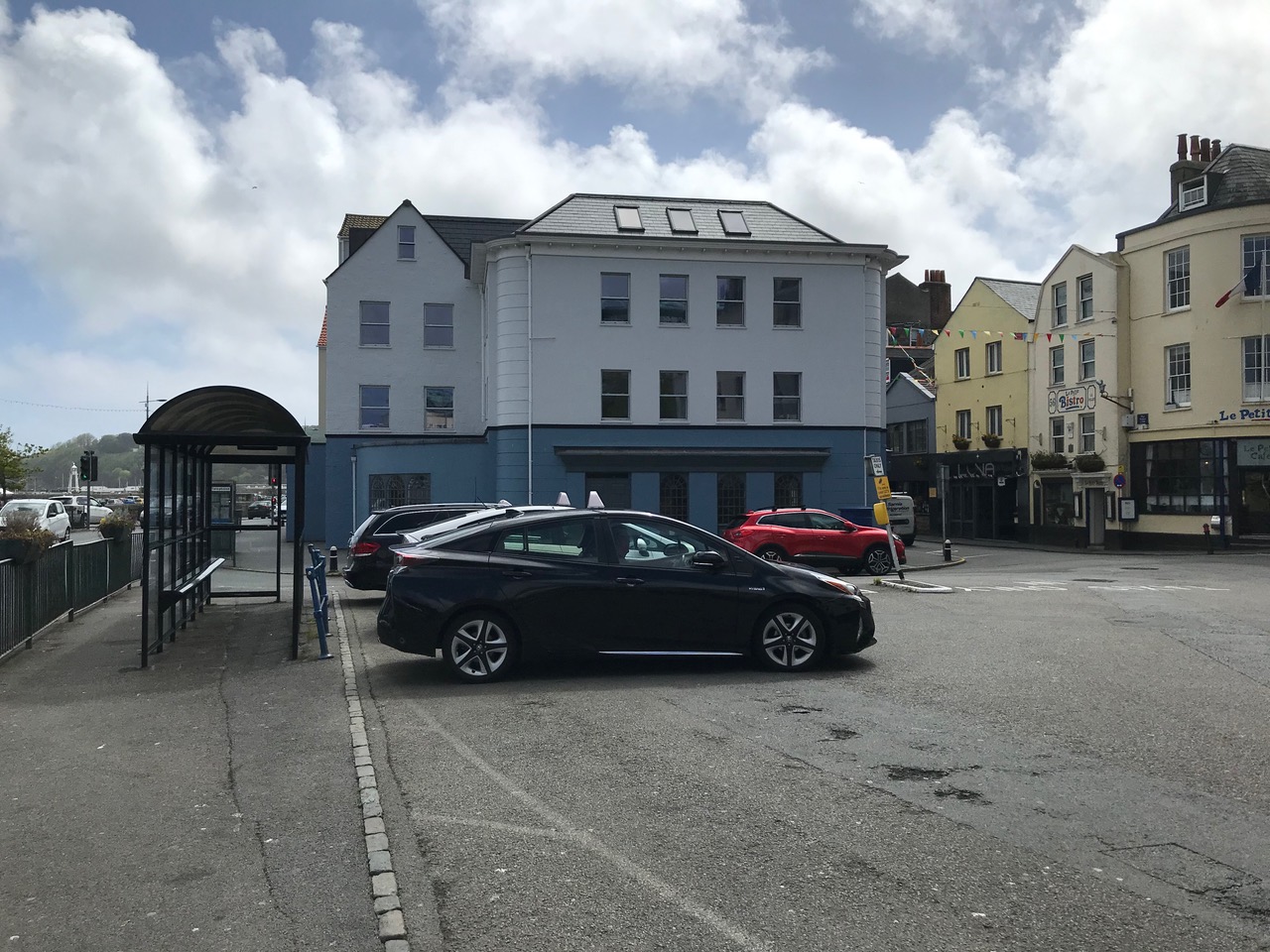